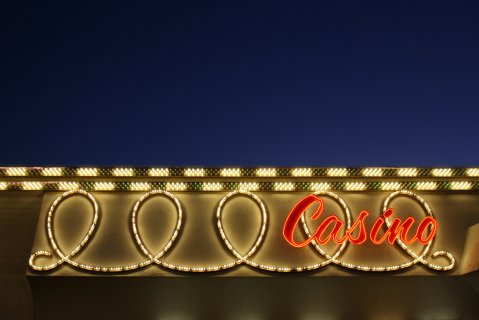 The Slots-A-Fun Casino is a casino on the Las Vegas Strip, owned by MGM Resorts International. It is adjacent to Circus Circus.

Slots-A-Fun is independently managed. It is one of the smallest casinos operating on The Strip, and offers some of the lowest table-game betting minimums on the famed street. As of summer 2008, players could wager as little as $2.00 at craps and $1.00 at blackjack. The craps table is directly located at the main open-air entrance and, of all gaming tables in Las Vegas, is the gaming table that is physically located closest to the traffic of the Strip.

The casino no longer hosts live table games. As of 2011, the only games were slots and other machines, such as blackjack and 3-card poker. There is drink service. The bar is staffed 24 hours a day and 1 or 2 cocktail waitresses work the casino floor. Certain beers and other drinks are free to slot players. (This may change during peak hours.)

Carl Thomas, a gaming executive linked to the Civella family of the Kansas City mob, owned the Slots-A-Fun casino in the 1970s when various parts of the mafia controlled the operation of casinos in Las Vegas. Thomas helped orchestrate an elaborate scheme to skim money from casinos for the mob, which he was later arrested, charged, and convicted for his role in the skim.

For many early years Slots-A-Fun was famous for giving out free bags of fresh-popped popcorn for early morning gamblers but these promotions have been discontinued.

A blog reported that on July 1, 2009, Slots-A-Fun would begin the re-branding process in order to be incorporated into Circus Circus.